“So long as men praise you, you can only be sure that you are not yet on your own true path but on someone else’s.”

When a child begins to learn to read and write it is only natural to praise him for his accomplishments. Praise is certainly good for all of us, but lavishing extravagant praise on your child might actually be detrimental to building both self-esteem and creativity. Praise generally focuses on the result, rather than the process. Constant praise leads a child to believe that the glory is not in the absorbed and engaged feeling she had during her endeavors, but in how successful the results have been. Children may begin to depend on a continuous loop of praise from adults in order to determine the worth of their efforts.

When a child offers you her first efforts at printing asking if she did it right, it is important to remember, that in answering the question in either a positive or negative way the result is that, in the child’s mind, what you are praising or criticizing is the product and not her perseverance and persistence. Parents too quick to correct, “It’s great, honey, but your L is backward, let me fix it.”,  although they have every good intention in mind, give a clear message to their child that they were expecting better. Children begin to strive for perfection in order to be to be applauded, rather than becoming one with the extensive and deeply creative process of learning.

When I was in school there was a hierarchy of stars given out for various achievements –red, green, and blue were on the lower end of the reward spectrum, silver was second best, but gold was parceled out stingily and only for excellence. In our goal oriented schools, with their focus on achieving higher and higher test scores, the overriding missive is: You are worth what others think of you, not what you think of yourself. Children are thrown off course early, desiring their parents and teachers praise, they work, not for the joy of satisfying their innate curiosity to learn, but for the highest grade. They want to make the team and get the biggest trophy, instead of enjoying the exhilarating feeling that comes over your body and mind when you are doing your personal best at any activity from reading to running.

Encourage your child by commenting on how hard he has tried. Ask your child questions about his work, why he chose a particular subject or color. In this way we individualize our praise, showing value for our children’s choices rather than the final effect. One child may take a long time drawing a butterfly which looks nothing like a butterfly. Ask her why and you may be surprised at the response, rather than a lack of fine motor skills, the child may tell you that the butterfly is flying around a garden, or hatching out of chrysalis. This use of imagination is far more valuable in establishing and strengthening the creative cognitive skills of true intelligence, than is the drawing of a “perfect” butterfly by rote. Sadly, it is the child with the perfect drawing that normally gets his work displayed and the child who happily scribbles, lost in his own world, that stops drawing because nobody noticed.

It is not only important in terms of understanding your child to ask about what she has done, and why she has done it, it also builds language skills, so necessary in early literacy. Writing down your child’s words on her drawing further extends these skills by reminding the child that writing is, simply, the spoken word on paper, a means to communicate to all. This subliminal lesson in the purpose of reading is invaluable. My experience is that children are very particular about the words they tell you to write, often speaking slowly and asking you to read their own words back to them so that they know you got it right. In small attentive ways we continuously show a child our interest and respect without, the sometimes, hallow words of praise.

Celebrate your child for who he is and not what he can do and self-confidence will grow. Praise sets up a fear of failure in the same way that criticism does. The child believes that perhaps what he attempts won’t be good enough, so he stops trying. Although no loving adult would tell a child that his work is awful, praise and criticism revolve around the same basic point – is my work good or is it bad? Ironically, no one can learn, either socially, artistically, academically, or physically, without failing. Therefore, fear of failure is paralyzing. When adults express either pride or disappointment they overlook the vast field of learning that lies between the two.

Independence leads to self-esteem. If a child is working to please someone else he is not developing independence, but interdependence. He is not trying his own inventive ways to get to a particular solution, but relying on those around him to tell him the “right” way to do it. So, gently encourage rather than overly praise, and you will see your child blossom. Whether children are learning to read, to play a musical instrument, or to hit a ball with a bat, share your joy in their efforts rather than their achievements and they will naturally gravitate to the things that they are passionate about doing-the true secret of success. 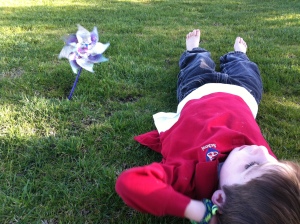 “Not all those who wander are lost.”  J.R.R. Tolkien

The modern world is a hectic one. Between school, sports, dance, music lessons, karate class, and other extra-curricular activities that fill our children’s days, there is precious little time for them to be alone with their thoughts. To be alone with one’s thoughts is to let the mind wander…to imagine. When the brain is free of distractions thoughts become reflective, and unexpected connections are made that expand consciousness.

Daydreaming enables us to revisit our memories. Allowing time to process these intricate emotions leads to deeper understanding of ourselves and others. When children are given the time to ponder they begin to take leaps from what they know to what they don’t know. Often, these original ideas are sweet, innocent, or funny…but they are, unmistakably, inventive, and show the developing mind at work.

When a child daydreams, no one can intrude on his fanciful imaginings. He is free to explore, to make unique, whimsical associations that are the seeds of creative thinking. We live in a culture that values productivity, but, ironically, frowns upon the very dreamers who are the gateways to inspiration and invention. Einstein said, “The intuitive mind is a sacred gift; the rational mind is a faithful servant. We have a society that honors the servant and has forgotten the gift.”

It is not only composers or poets who benefit from daydreaming, but scientists, mathematicians, and engineers as well. MRI research has revealed that, during a daydream, areas in the brain associated with complex problem solving are activated. Scientists now believe that daydreaming is as important as the dreaming we do at night – a time when the brain works hard to coalesce and consolidate learning. Neuroscientist and human development psychologist, Mary Helen Immordino-Yang, in an article in the journal Perspectives on Psychological Science, states that daydreaming is vital to learning, ultimately strengthening cognitive abilities such as reading comprehension:

Daydreams can reveal truths that are not visible in the too bright light of everyday activities. Like a candle, or a star, they can help to lead us in the right direction. Let daydreams inspire your children. In a world that shouts for their attention, encourage and respect these quiet, thoughtful moments. Let’s teach our children to value the beauty of silence and their own fantastical inner worlds.

While no good parent would feed a child nothing but junk food, unfortunately, many parents do not pay attention to what their child is ingesting through the seemingly always accessible electronic media. We all know that entertainment has become increasingly violent. It is not as often addressed that it has become alarmingly superficial and mean spirited. If a child is being fed these messages for many hours a day it becomes a daunting task to undo the damage. The average American child uses some kind of electronic device for 7 hours a day while the American Academy of Pediatrics recommends no more than one hour per day for 3 to 5 year olds, two hours for 6 to 18 year olds, and none at all for children under the age of two.

Studies show that immoderate use of television and video games lead to attention deficits, anxiety, and difficulty with concentration. It is very important that parents monitor the time and the quality of all electronics their child is engaged in. Take the time to determine if your child, through this media, is being encouraged to develop the kind of character traits that you hope she will begin to emulate.

Books offer a respite against the frenetic world of electronic entertainment. They introduce characters that are more than just vehicles designed for bouts of combat. Books slow your child down and increase his attention span. They nurture imagination and creativity and, unlike passive screen time, make demands on your child to think deeply. They are an important part of a healthy diet for your child’s mind.

The phrase “Use your words” in relation to encouraging children to express themselves has been around long enough to have become an iconic idiom. Normally it is used in conjunction with reminding a child that hitting, biting, throwing one’s self on the floor, etc….are not effective ways to communicate. But have you ever thought about saying to a child who is behaving properly,“Use your words”?

This blog is about the importance of establishing a love of literature early in life and the connection that reading has to the developing mind. Curiosity, creative thinking, imagination, attention span, and even social skills are all heightened through early exposure to books. Words connect us. Conversations, whether with a 3 year old or an 80 year old, inspire us and help us to see from different perspectives.

After all, what are books if not voices on the page…voices communicating stories to anyone who cares to listen. The author’s voice may tell stories of fairies, baby animals, princesses, dragon fighting, how to make a kite, or what lives under the sea…whether fiction or non-fiction, a book explores new thoughts that expand the heart as well as the mind.

All day long children are bombarded with peer pressure, expectations to perform, to obey, to excel, to be quiet when they feel like talking, to talk when they feel like being quiet. They are enticed with glossy packaging and advertisements designed to convince them that happiness lies in material possessions. Reading is free of all that. A book takes a child to a simpler, less intrusive  world. It sets their mind to dreaming and makes them smart.

What a beautiful gift to give a child, and it is as simple as using your words.