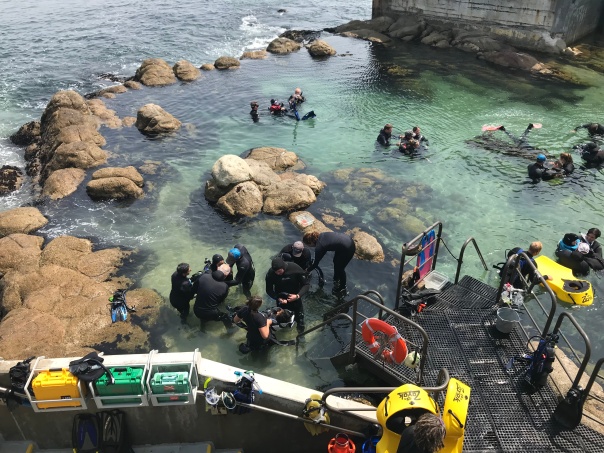 As students go back to school, and even at very young ages experience the mounting pressure of being judged on their “knowledge” it is important for both parents and teachers to think about what knowledge truly is, and whether or not it can be tested, bell curved, and graded. Is knowledge acquiring a perfect score of 100%? If one’s intellect can be confirmed as superior by A grades, by being able to re-state exactly what has been told to us, students might as well be on a conveyor belt that boxes up perfectly educated children and spits out discards, those who just won’t fit in that box, misfits whose report cards generally fall into the standard deviant, below average range.

I recently had the experience of watching a dedicated team of staff divers at the Monterey Bay Aquarium’s Days of Discovery spend hours in the water with several groups of children… Children whose disabilities and special needs ranged in varying degrees of severity, those with cognitive impairments such as Down Syndrome and autism, others with physical restraints, muscular dystrophy, spina bifida, cerebral palsy…
These children, some of whom are paralyzed and others whose own minds keep them bound, were, for a short time released… floating freely in the bounty of the Aquarium’s Tide Pool, discovering the startling cool water, the clamminess of kelp, and the delicate whorl of the tidal snail.

Watching their alert faces and expressions of joy there is no doubt that they were learning, but were we to test them on their experience how would they fare? Can a child’s mind be evaluated on the intricate neural connections that are made by the scent of the sea, the spikiness of a sea star, or the ability to trust a smiling stranger in a scuba mask? Can what the heart discovers be graded? I would not want to be the one who has to decide such a complex and intimate attainment.
Regardless of age and regardless of subject, the more that we can impart the glory and the wonder of the world to students, the more they will learn. Learning is not static. Information continuously flows from one synapse to another creating patterns of recognition and understanding that build knowledge. It cannot be forced or coerced into being. It cannot be accurately labeled as above or below average.

What can educators learn from the children that participated in the Days of Discovery program? That all children have special needs, wants that are so well hidden we often can’t recognize them. Champion the child that doesn’t fit into a standardized mold. Trust that knowledge is being imparted in different ways to each child and, knowing this, to offer a variety of ways to learn.

Brilliance is often overlooked because it is defined by creativity which cannot truly be measured. Be wary of putting to much emphasis on testing, for children will universally shut down if they are shamed by poor grades. I witnessed a child at my local library the week that school began put her head down and cry twice within a half hour over homework, her mother becoming increasingly impatient and irritated with her as she erased her answers again and again. Ask yourself what will be learned from this experience.

There has to be a better way to teach in which students are seen as explorers, encouraged to float freely in this odd and beautiful world – where knowledge is not judged by quarterly report cards, but in the soul, a sacred and individual palace of discovery.